skip to main | skip to sidebar

Stratholme - Sadness in my heart!

Have you ever heard of the city of Stratholme? It was once a prosperous city of the humans inte the north of the eastern kingdoms. It was actually the main city of the humans before the great plague that happened many years ago. Prince Arthas killed hundreds and hundreds of people in order to "save their souls from damnation of the scourge". I simply see it as a slaughter with nothing to compare it with. The undead bastards still took over the city and managed to manipulate the people in it. The town is under the cluthes of the dreadlord Balnazzar. Even though my historybooks says that he was killed by The forsakens Sylvanas Windrunner and "her pet" the dreadlord Varimathras, he was still alive when I met him. Yes, I met him during an epic struggle with my friends. Running through the whole time, belive it or not I died many times. Thanks to my idol, the night elf priest Whitestar, I was revived.

Although, seeing all the spirits of the poor women and children of Stratholme wondering around without a goal, forever being in that light forsaken place, it broke my heart!

We killed Balnazzar. what a hoy, we danced a long, long time after that. 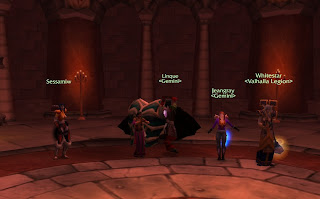 We dance at the corpse of the dreadlord Balnazzar!

I thank my friends, I can't make it without them!
Posted by Memoria at 6:11 PM

The Shadows Of Priestess Memoria

I am a Shadowpriestess named Memoria. Read about my adventures in Azeroth, my battle against the savages of the horde, my path to greater strength and wisdom and my new friends in a gigantic world of possibilities.